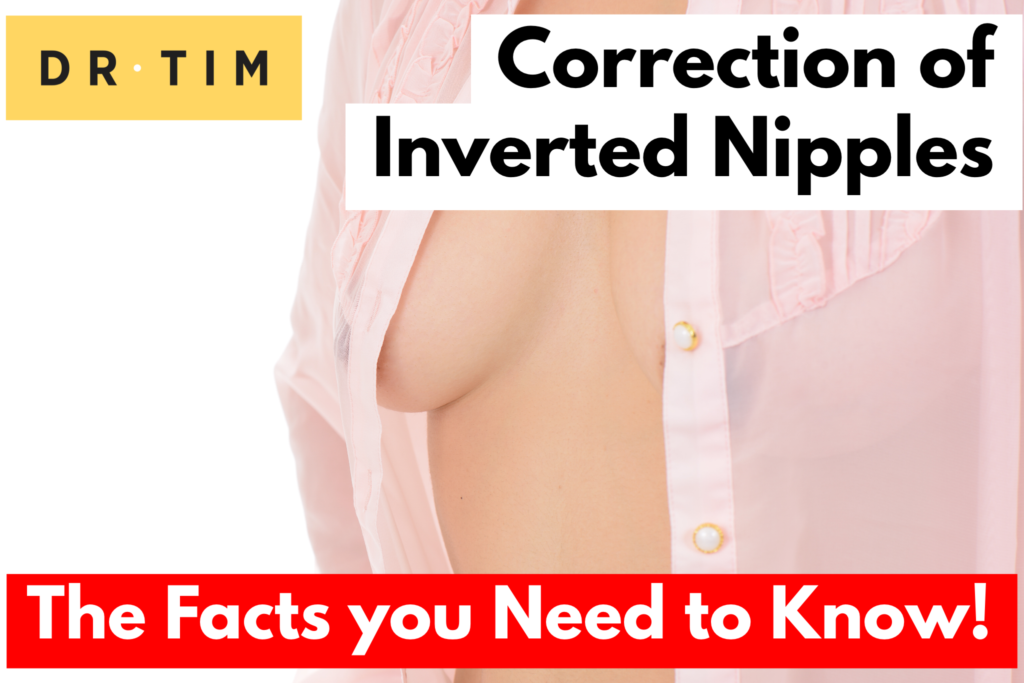 As many as 3% of Australian women have at least 1 inverted nipple but the subject of nipple inversion is seldom discussed amongst family, friends or the media. Clearly, nipples are an integral part of the breast, playing a role in appearance, in sexuality, and in motherhood. Therefore, many women who have inverted nipples, feel that it aﬀects their self-esteem and body image.

Most cases of inverted nipples are just born that way (congenital). However, some nipples become inverted after breastfeeding when scar tissue builds in the milk ducts. Nipples that become inverted after birth are usually caused by one of three things: not enough skin at the base of the nipple, constricted milk ducts, or scarring of the milk ducts due to breastfeeding. There are 2 types of inverted nipples: shy and densely inverted.

The surgery itself is broken into 3 stages:

Stage 1: an incision measuring 4 to 5 mm is made in the lower portion of the nipple. The ﬁbres or ducts are then released that are pulling the nipple down. The nipple is drawn out with much care in order to preserve the ability to breastfeed.

Stage 3: a small plastic “stent” – like a tiny medicine cup – is placed over the newly extracted nipple. This stent actually holds the nipple in place and ensures that the nipple heals in an outward position. Not only does it help with the nipples’ projection, but it also protects the nipple in the healing stages. This stent is kept on for 1 to 3 days. The patient then returns for a follow-up visit to remove the stent and the process is complete.

Post-operatively, there is little care needed. While the stent is on, patients cannot get the area wet and sexual contact is discouraged for the ﬁrst week after surgery. Occasionally, the patient may need an ointment to aid the healing, although this is rare. The wound heals very quickly – to the point where the scar is usually invisible by the time the patient returns to have the stent removed (the stitches dissolve within 10 to 14 days). Possible complications include the retraction of the nipple or a local infection.

Although the correction of inverted nipples is a procedure that can greatly assist both the self-esteem of the suﬀerer and the function of the breast, more and more women are coming to my practice seeking nipple surgery for repair, correction, and enhancement of other conditions too:

So despite the fact that nipples are usually hidden, women still want them to look attractive. Many women suﬀer with nipple and areola abnormalities such as inverted nipples, enlarged nipples, and puffy, enlarged or discoloured areolas.  Many of these conditions can impact breast function, but they all impact the way women feel about their bodies. The nipple can be repaired during outpatient surgery or during breast enhancement surgery.

Question:  Do women feel inverted nipples is such a big issue to warrant surgery?  You can leave a comment below.

Comment0 | Share | Tweet | print | email
Categories: Breast, Inverted Nipple Correction
Disclosure of Material Connection: Some of the links in the post above are “affiliate links.” This means if you click on the link and purchase the item, I will receive an affiliate commission. Regardless, I only recommend products or services I use personally and believe will add value to my readers. I am disclosing this in accordance with the Federal Trade Commission’s 16 CFR, Part 255: “Guides Concerning the Use of Endorsements and Testimonials in Advertising.”