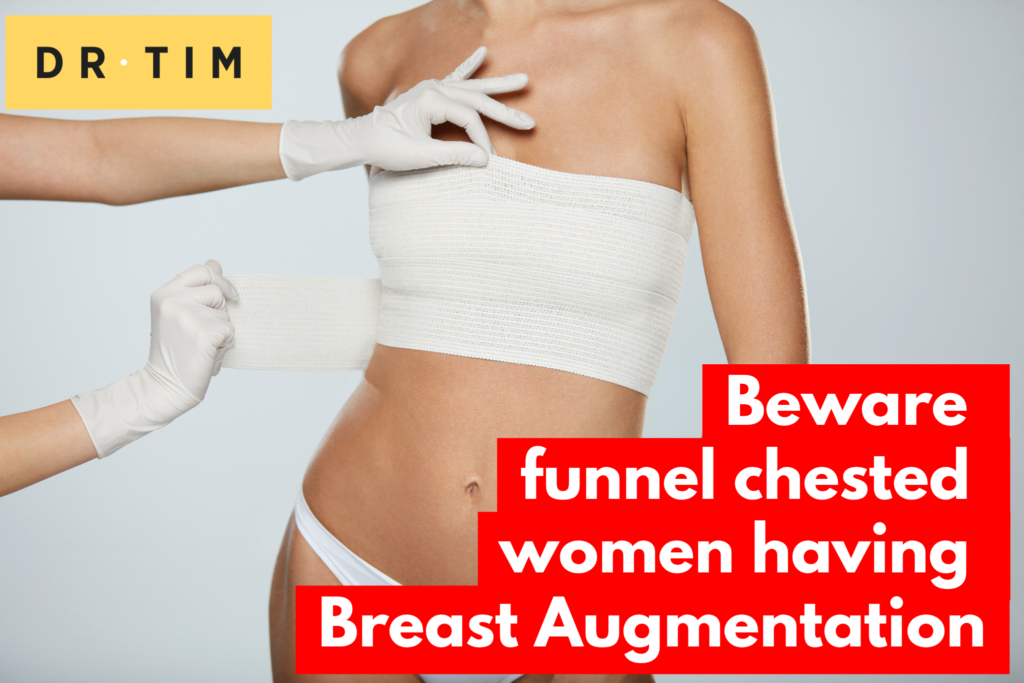 Funnel chest (pectus excavatum) is an abnormal development of the rib cage where the breastbone (sternum) caves in, resulting in a sunken chest wall deformity. Funnel chest is a deformity often present at birth (congenital) that can be mild or severe. The cause of funnel chest is not well understood. Yet, researchers believe that the deformity is caused by excessive growth of the connective tissue (cartilage) that joins the ribs to the breastbone (also known as the costochondral region), which causes an inward defect of the sternum.

While the vast majority of funnel chest cases are not associated with any other condition, some disorders may include the sunken chest feature include:

Although the condition of funnel chest is relatively uncommon, it presents its own unique problems for women requesting breast augmentation. The commonest question asked is, “Which pocket is best to place the implants?”

In women with funnel chest deformity, I have tended to place the breast implants under the muscle because the breast and skin can be very thin over the midline of the chest and can make the implants more visible with a higher chance of rippling.

I also inform my funnel chest patients that the breast implants tend to slide towards the middle of the chest creating a very pronounced cleavage with nipples that tend to face inward (“cross-eyed” appearance). Because the patient with a funnel chest has a deeper midline, they will generate much more cleavage faster than patients with a ﬂat chest wall. In worse case scenarios, the breast implants can slide towards the midline and “kiss each other” creating the “ﬁgure-of-8” or “bread loaf” deformity. Consequently, the experienced plastic surgeon will use a slightly smaller breast implant and will go under the muscle and make sure to leave enough tissue intact along the midline to prevent the implants from coming too close together.

As you can tell, this is a more difficult operation than regular breast augmentations. In my experience, the breast implants tend to improve the appearance of the “funnelling,” in that the indented area of the chest wall is less noticeable.

Question: Have any women with funnel chest experienced problems after breast augmentation? You can leave a comment below.

Comment0 | Share | Tweet | print | email
Categories: Breast, Breast Augmentation, Breast Implant Revision
Disclosure of Material Connection: Some of the links in the post above are “affiliate links.” This means if you click on the link and purchase the item, I will receive an affiliate commission. Regardless, I only recommend products or services I use personally and believe will add value to my readers. I am disclosing this in accordance with the Federal Trade Commission’s 16 CFR, Part 255: “Guides Concerning the Use of Endorsements and Testimonials in Advertising.”